After a stressful week prior to our departure, with a government vet suddenly writing us a letter stating that due to not being registered, the only thing we would be doing in Lesotho was sight-seeing.  Followed by the day of our departure Lekena sending us a text message informing us of political unrest in Maseru, whilst we were one hour from the airport… the trip seemed doomed but we are all terribly pleased now that we went.

At Heathrow, introductions were made and those of us that knew each other were already laughing pre-check in as bags of needles, syringes and drapes were swapped between cases.  Two 7.5hour flights with a 2hour wait in Dubai and finally we arrived in Durban to be met by Dr. Lawson Cairns and his wife Karin.  Our thanks to them cannot be exaggerated because not only did they nearly ruin their two cars driving the two hours of dirt tracks to get us to the Lesotho boarder, but they had to sleep in their car, when a large black woman appeared in what was meant to be their room for the night!  Ten days later, they returned to pick us up and provided us with 4* accommodation, with the opportunity to get properly CLEAN.

So at the SA/Lesotho border we met Lekena, a slim built middle-aged man who was at first shy to meet our look, despite his beaming smile.  Thankfully though he didn’t understand everything, his English was good.  Once we’d driven through Quatcha Snak (don’t forget the click in the pronounciation) the roads emptied totally, as in totally.  In the 10d’s we spent there we only saw 10 cars and one of them was the old Toyota hatchback, with a wonderful spider-webbed crack in the windscreen and totally bald, as in smooth with no tread at all tyres, in which we were driven around in.  The country is all above 1000m and the scenery is simply spectacular, with the skies at night being so clear you could see thousands of stars.

Our living space was within a stone building with a corrugated iron roof (gosh, doesn’t that make a noise when it rains or a bird simply lands).  They had put 3 beds in the two rooms.   At the end of the garden was the ‘Long Drop’ and at the edge of the root vegetable plantation was the hose.  Obviously being high up in the mountains they have no shortage of water and the hose ran 24/24.  A team of Americans had been over in 2009 to get the pipe work for the water installed.  So there was our sanitation combined with the arrival each morning at 6.30am of 3 buckets of hot water and 3 large plastic bowls which we could stand in or sit in, in some cases. 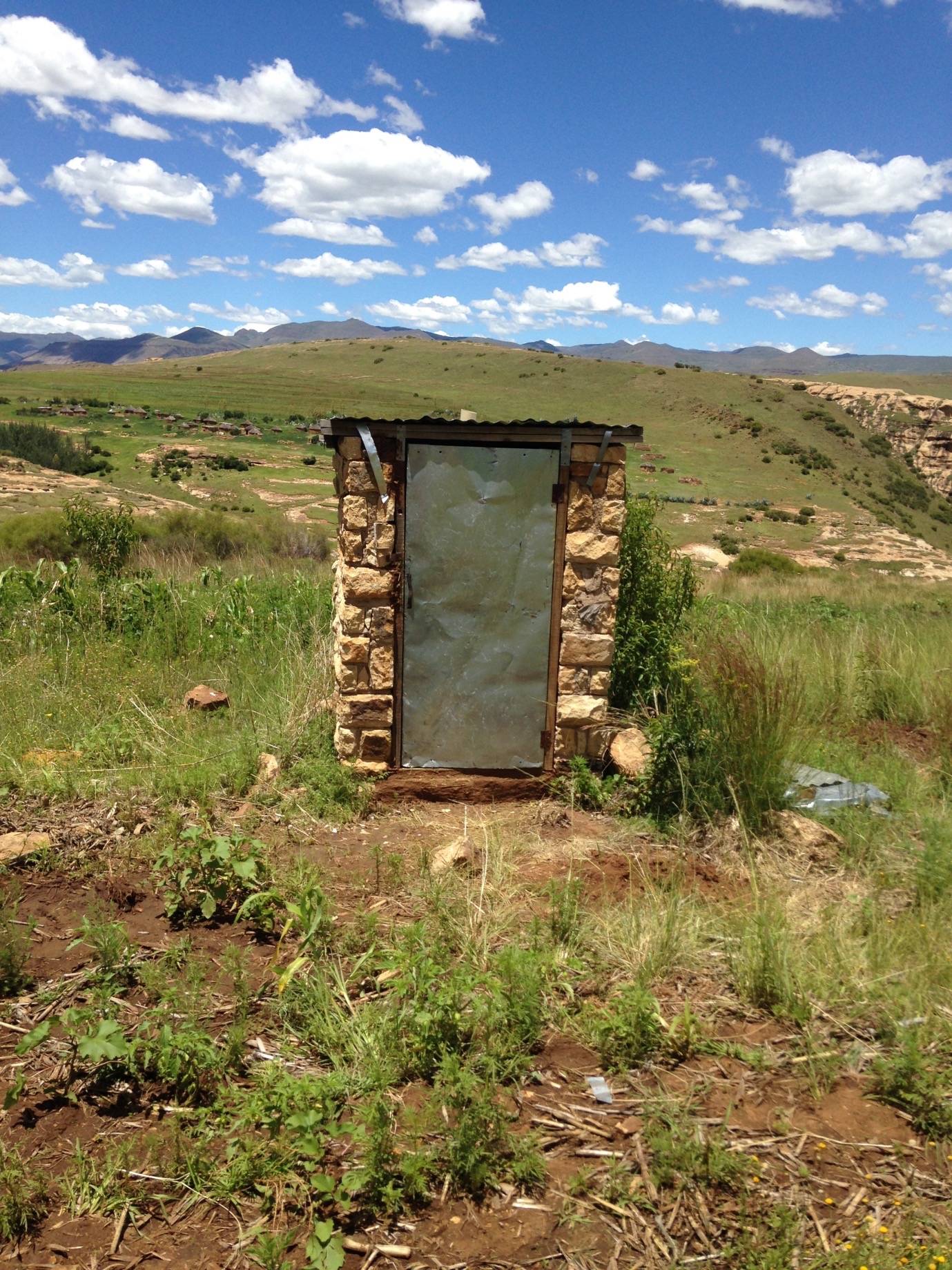 Arriving quite late on day 1 we just ate, which involved an uphill hike across a cornfield and then when that was finished and we went to bed that involved a downhill hike across the cornfield.  By then end of our stay it provided quite a ritual as we got to befriend ‘Crackling’ the young large white pig.

Day 2, Lawson and Karin left early for their 5 hour drive home despite having had to sleep in their car the previous night.  Then all bar me walked to the neighbouring village to meet ‘the chief ’( an 86 year old woman) … ‘no not far’.  Because they all walk such extreme distances nothing is very far for them!  The team all returning in the early afternoon a bit burnt and Toni was missing a sock.  That afternoon Lekena, rang all his friends, 2 tables were set up and we started work. 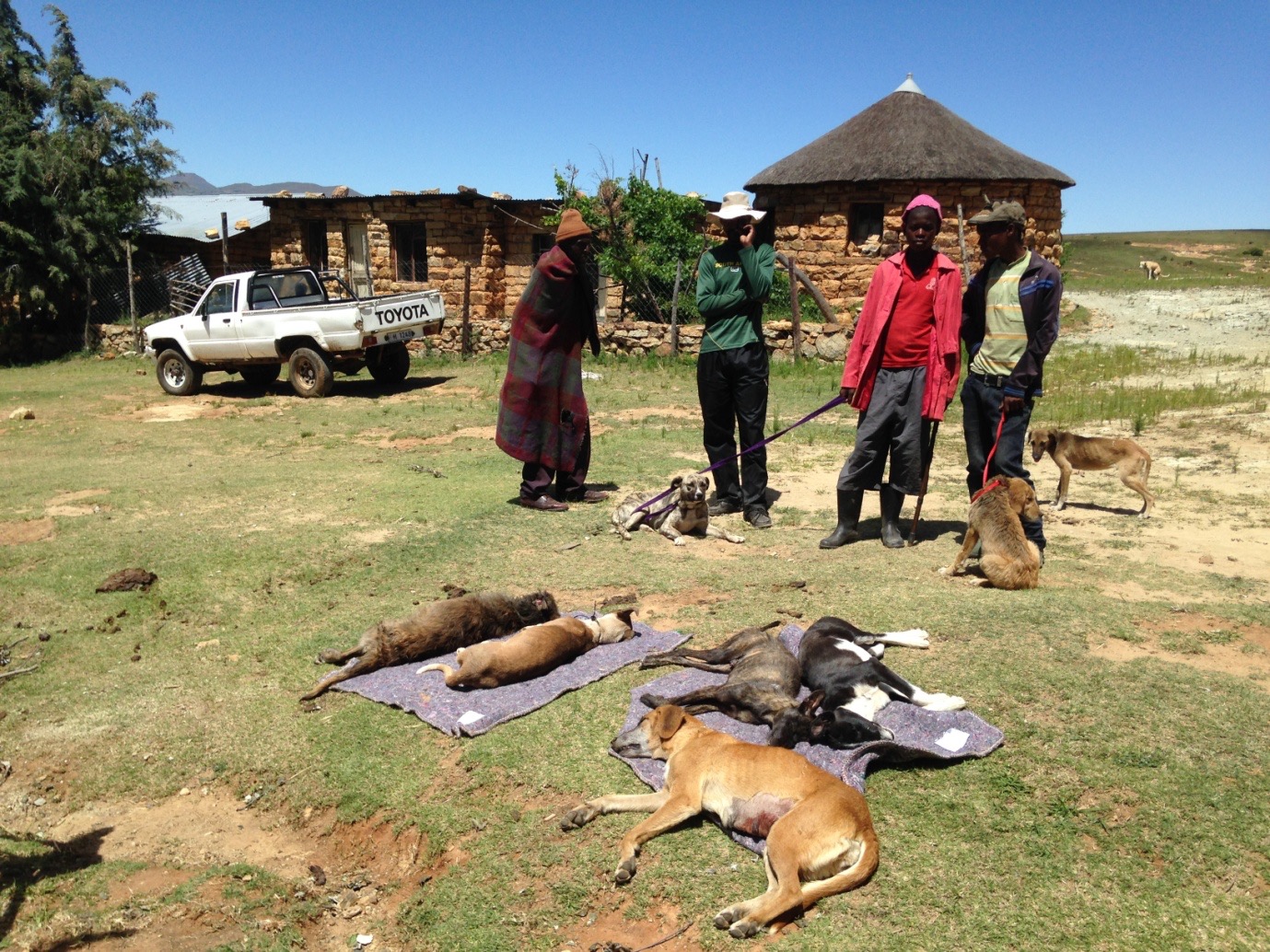 Neither the locals nor Lekena had ever seen a sterilisation or even a castrate,  so they looked on in fear that their animals had been killed once we’d given them their KTD (Ketamine, Butorphanol, Torbugesic) combination.  Bearing in mind, a doctor only visits the villages once or twice a year, it became apparent within a short period of time that our Spay Sisters mission had to adapt it’s focus.  In previous years we have gone out with ‘numbers’ in mind ie/ how many dogs and cats we could sterilise in order to help the overpopulation problem.  Here in Lesotho our role had to change, there wasn’t a stray overpopulation problem, they themselves were killing the extra puppies or kittens if it became a problem.  We had to show, explain (at least the best we could despite the language barrier) why we were doing what we were doing and encourage them to bring us their dogs.   The average size of the adult dogs was 25-30kg’s and a lot were greyhound crosses as they have racing in Maseru.  They race dogs and horses in Lesotho and are an animal loving nation despite a few weird tribal ideas ie. Helena noticed that the dog she was operating on was bleeding from the mouth, after better inspection it turned out to be a huge gauge of membrane missing from beneath it’s tongue with a very sheepish looking owner standing beside it!.  Lekena explained using the big pin from their blankets they slice beneath the dogs tongue to rid of the ‘tongue worm’ and then the dog will get fatter.

Another weird idea that we encountered happened on day 3.  A girl arrived with a rice bag and said ‘cat operation’ so we got into the car, windows closed despite the 30 degree heat and opened the bag to find 2 male cats ( 1 had a retained testicle – thankfully it was inguinal) with clipped ears.  As ear clipping is a universally known method for identifying neutered stray cats from a distance, we wondered whether they had had another vet in the area.

‘No No we cut ears ourselves, it makes cats stay at the home and be friendly’…

Trying to get them to understand that the staying at home and being friendly was due to the neutering was difficult so the 3/11 cats neutered who still had their ears, we left them in the hope that they will correlate the operation with the behaviour change and not the ears!

A month or so before our trip, Bev Seabourne had written to us asking whether we did horses! As Spay Sisters is definitely in for a penny in for a pound, we had agreed explaining that she had to provide the drugs and emasculators.  Solly and Samson were employed by Highveld Horse Care Unit and arrived in a nice 4 x 4 on the second evening with enough sedatives for 10 standing castrates.  A huge thank-you  goes to those 2 men, because not only did they ferry us about, they also translated, held dangerous dogs, provided us with Shoofly and acted as body guards!

So Lekena would ring neighbouring villages (nothing was near!) we would all set off and then on arrival set up a mixture of tables and bags then wait and dogs, bags of cats, horses sometimes a sheep  or a donkey would turn up and we would vaccinate, plus or minus operate and ‘the boys’ would shoe, treat wounds and plus or minus castrate.

After the first standing horse castrate as Solly’s emasculators didn’t even have a ratchet mechanism it became obvious that I was going to have to teach him to castrate horses.  He had done a lot of RSPCA work in SA and was familiar with needles and injecting etc… As the nurses had no large animal practice either they also got taught i/v’s i/m’s and s/c’s in horses. 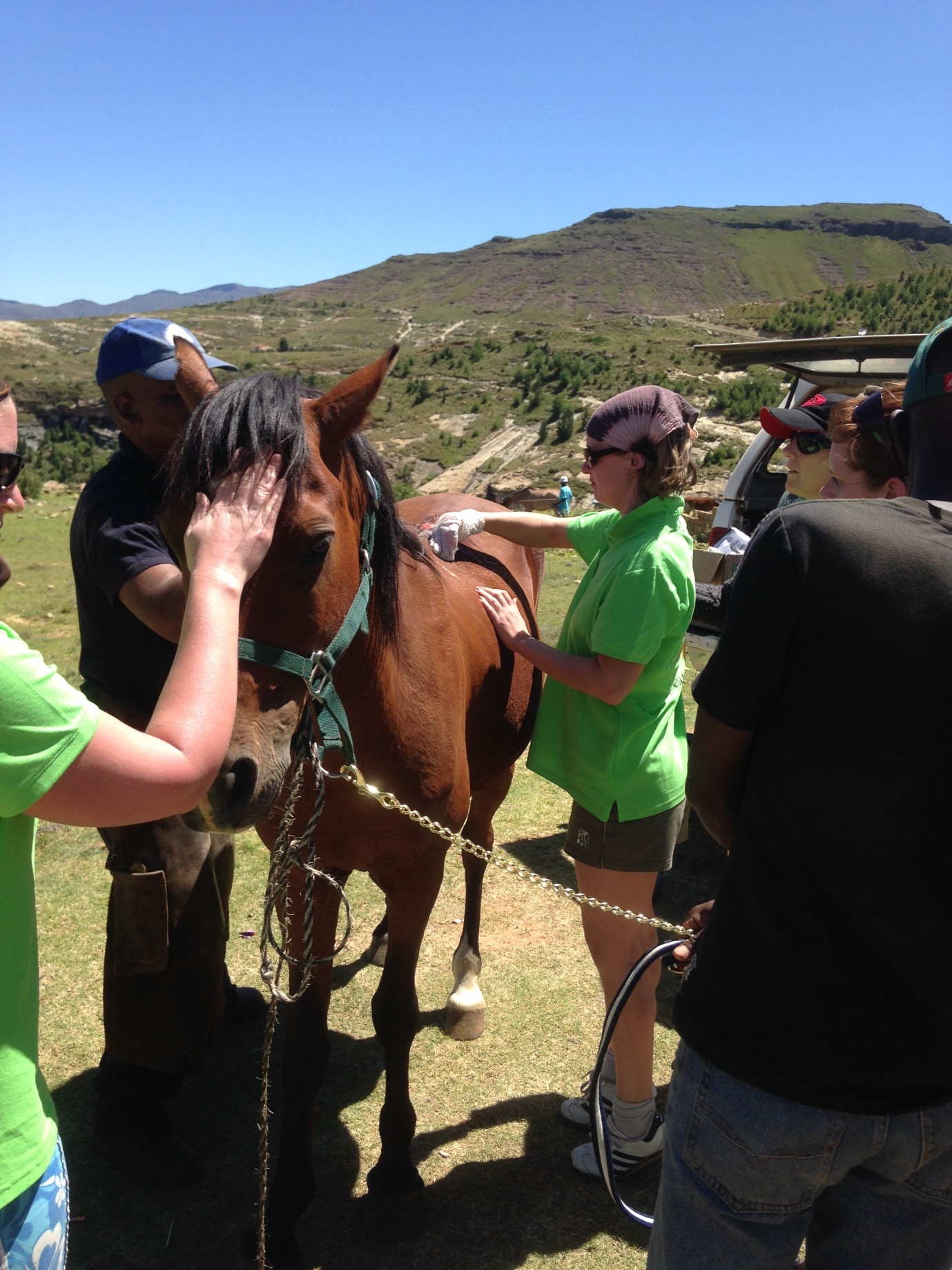 Solly and Samson left us on day 7 to return to SA. On the day he left Solly castrated 2 horses entirely on his own, only with Samson’s help and everything was written down in detail.  1. Check the horse has two testicles etc. They are now due to make a monthly trip to Lesotho and will now be able to offer, shoeing, treatment of sores and castration.  It will therefore be being done to a much higher standard than any of the locals present methods. 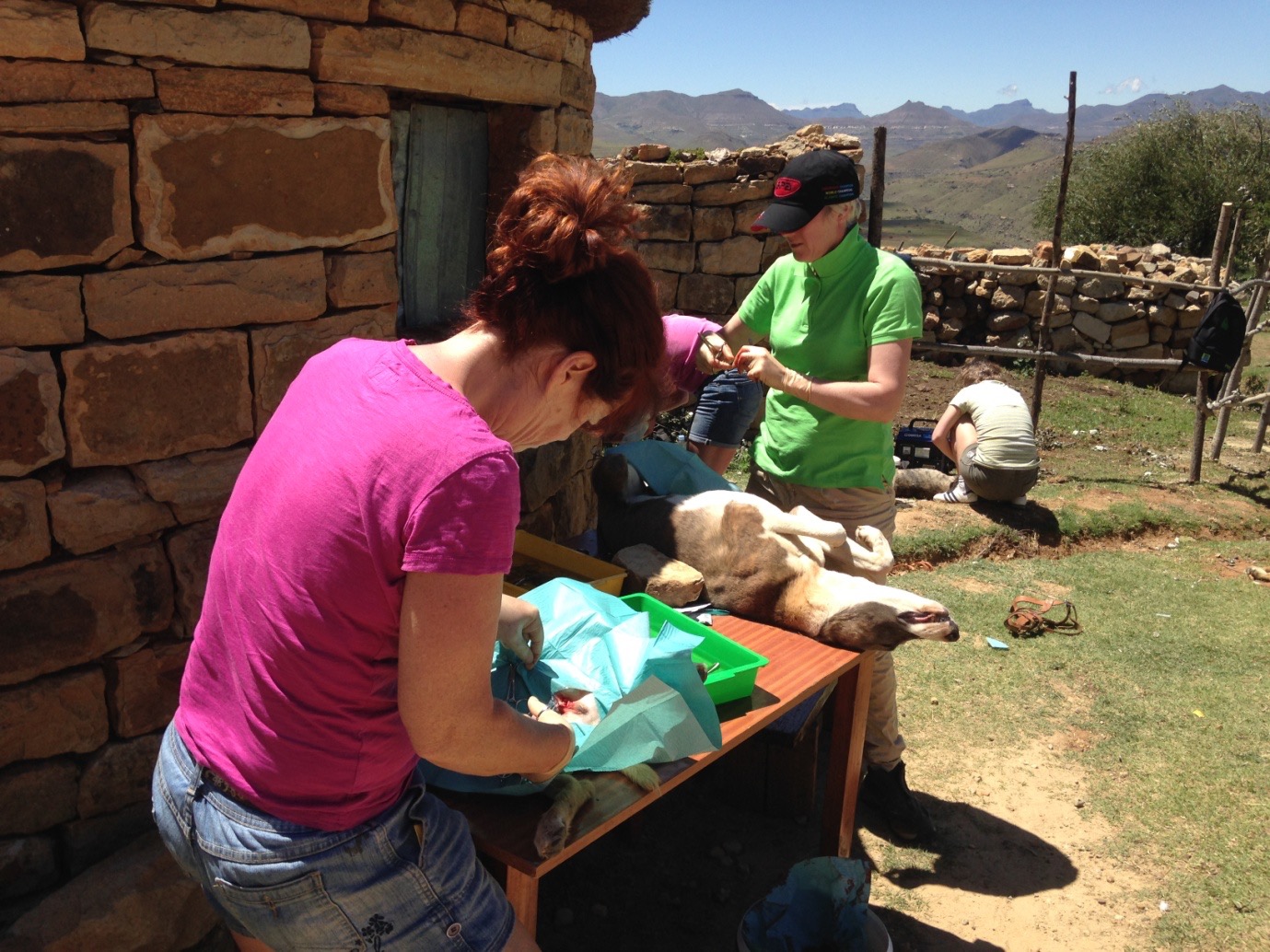 Because we really were ‘a novelty’, white women in green t-shirts we spent a lot of time surrounded by school children.  So Helena on numerous occasions stepped up the pace by launching into sing along songs, her repartee including Father Abraham, Head-Shoulders-Knees and Toes, Put your right leg in! Realising we had another market for our ‘Spay sister’ talents we went off to the local school were we taught the similarities between man and dogs and cats.  Explaining if you throw a stone at a man it will hurt and if you throw a stone at a dog it will hurt too!

The school choir then got together and sang for us.  It was a very moving experience.  The country of Lesotho has the 3rd greatest number of Aids/capita and hence there are quite a few orphans.  They aren’t distinguishable from the rest, all wearing layers of clothing despite the heat.  In general the children looked ok and there were only a few with puffed up faces, which we took to be due to protein loosing enteropathies.  Our aim now we are back is to send enough human wormers, vitamins and some books and pens back to the school.

By our last day we had achieved our aim, word had spread,’ we were good’!!  The people were bringing their dogs and saying ‘OPERATION’ rather than at the beginning of the 9 days when they only said ‘VACCINATION NO OPERATION’.  With a lot of fond farewells, the morning we left to return to SA, Lekena asked if we would come again and at this stage we don’t know.  There are definitely other places in the world with far greater overpopulation problems and there are areas were the local vets need encouragement and help to get operating themselves but despite the lack of amenities it was definitely a cleansing experience!! (and that is internal cleansing rather than external!) 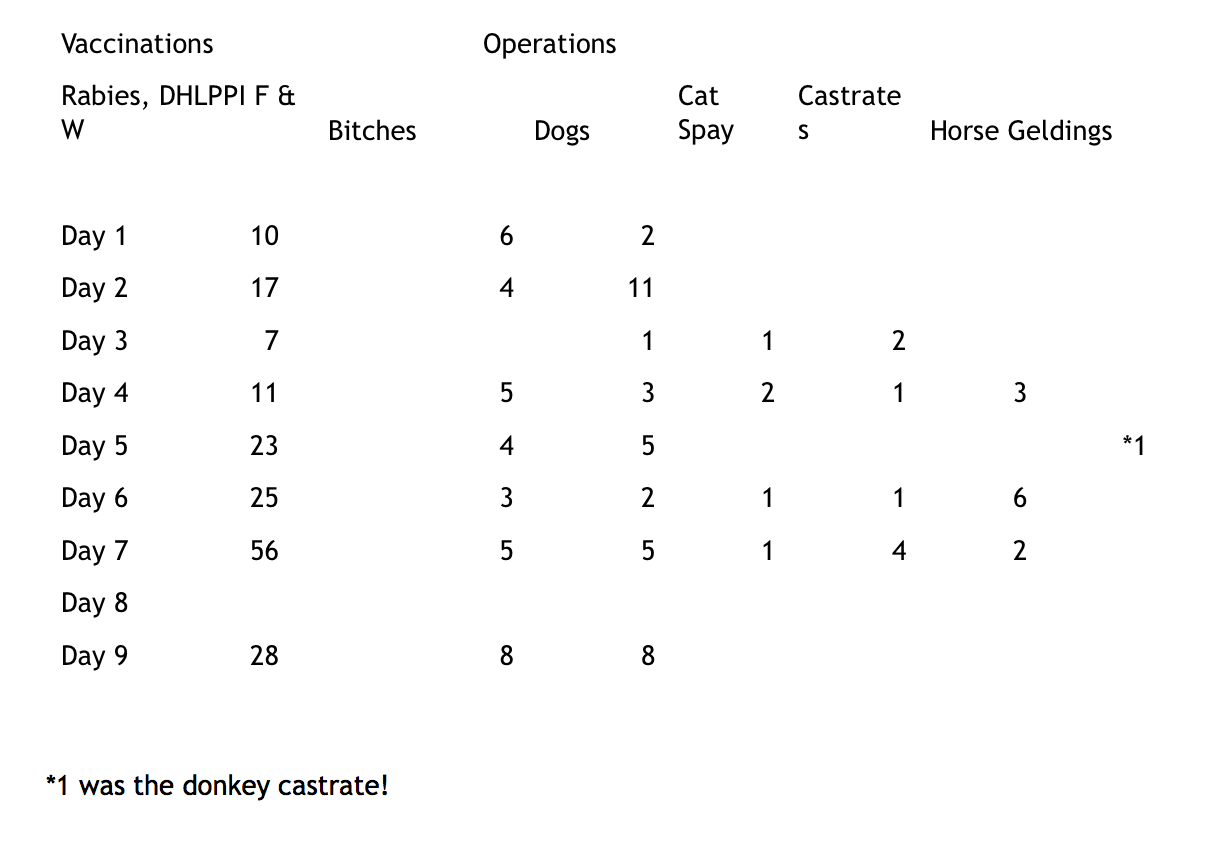 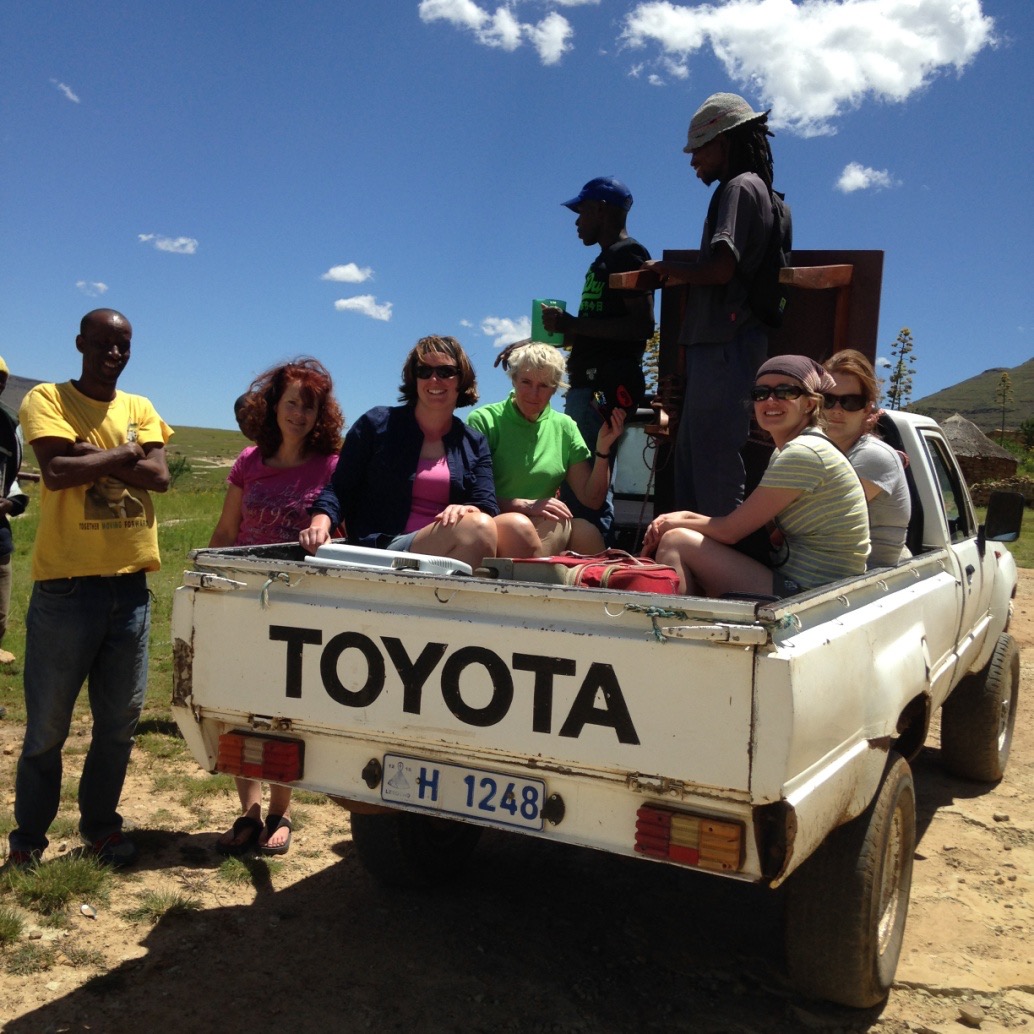