So the actual trip started for most of us on Sunday 14th January. I had spent the previous two weeks in an absolute turmoil, faced with a myriad of problems due to the possible consequences of drug trafficking, the lack of written confirmation concerning accommodation and unfortunately Toni-Marie at the last minute falling sick with a hooping cough!!

However, despite the uncertainties and in true Spay Sisters style the trip wasn’t cancelled.  Some of us met at the Stansted airport to share luggage.  Suzy flew in from Kuwait and joined us in Lisbon airport. While Phoebe and Anna, unknown to the majority of us, vet students met us at the visa booth in Saint Vincente arrivals.  Jill, the final warrior, was waiting for us at the Saint Vincente port where we caught the boat to Sao Antao. To what we were going to arrive, other than a definite Portuguese-English language barrier, we didn’t know.  At the last minute, due to Toni not coming, Tess, my daughter joined us, which though Spanish isn’t Portuguese, they did seem more able to understand her than the rest of us!

The boat docked and despite studying the quay, there didn’t seem to be anyone, that looked as if they would be meeting us.  Though we had had email contact with Irlando finally on the Tuesday before we left, we had taken sleeping bags in case.  The countryside looked barren and volcanic, the weather was warm, but the wind was impressive.  So we wandered through the port buildings along with  the rest of the people who had been on the boat and looked around.  It was very busy as people met friends and family, jumped into taxis or cars and disappeared.

We were attracting a bit of attention, nine white women, but we were left alone after the taxi drivers had understood we were not interested.  So still with no idea, who we were meeting or where we were going to be taken if indeed we were, action was needed.  Approaching a man I said ‘Do you know Irlando Ramos?’ He seemed to get the idea and started babbling away into his telephone.  He didn’t have the number, but he knew someone who did! The result was we were told ‘meetings, meetings, later’ In the end, we were left waiting under an hour, before Irlando arrived, greeted us, waved a hand for a taxi to come and we were driven off in two vehicles to a very nice looking hotel.  Everybody was very relieved, the accommodation for the trip was going to be fine….there was even a hotel pool!!!

Irlando, then let us get organised, it was Monday evening, before returning to have a meeting with us, and then the President even arrived to welcome us. Information was exchanged about where we would be working, where we would be eating our evening meals, and at what time the Taxi would be arriving, 8.30am for us to start work.

They had never had a veterinary charity working on their island before so they didn’t know how it would work but they had put some men at our disposal for catching the dogs and cats. 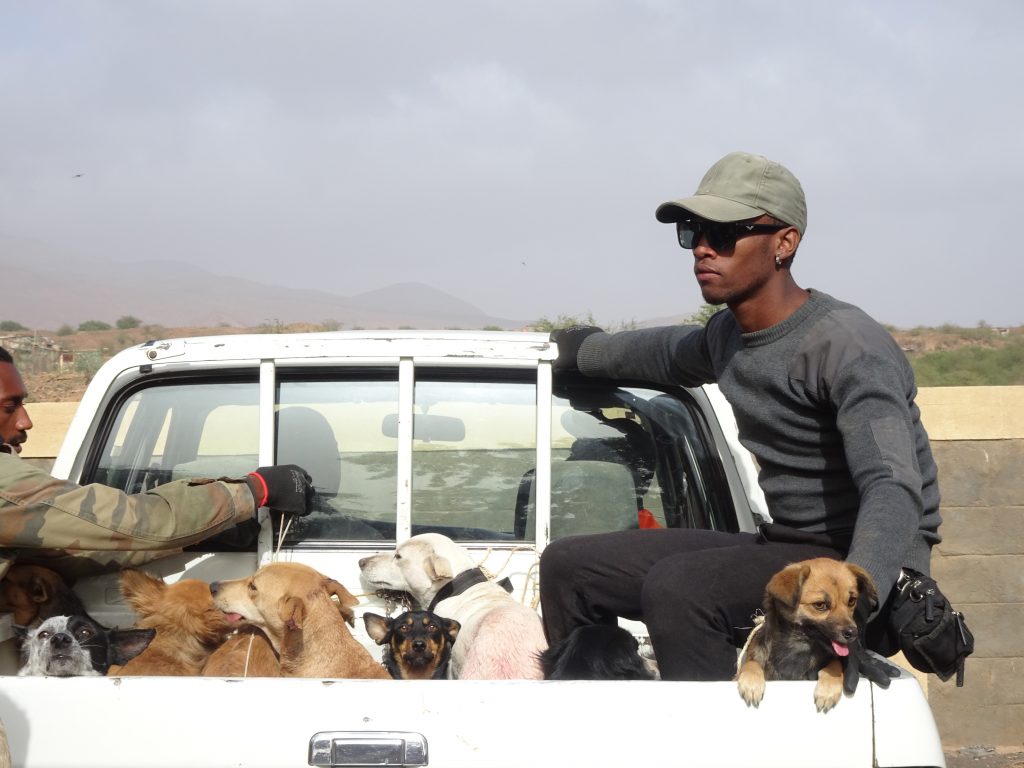 Viviene is their local ministry vet, who thankfully spoke English and whom we met the following morning when we arrived at the Centro Caprino de Cha de Italia, where we worked.  Relaxing now with the accommodation and food organised we soon had our next worry, how was our anaesthetic protocol going to work.

We have always used the ketamine, domitor and butorphanol up until this year.  However, Ketamine is now becoming very difficult to get, and it is becoming very carefully controlled, due to its use in the party scene.  So the alternative we decided to try was Zoletil, though none of us had ever used it before.  The other problem with Zoletil is that there are no combination drug charts.  We rang Virbac to enquire, and they sent information on how to anaesthetise animals and also a chart on drug doses for all sorts of exotics!

So we decided we would start with the lowest dose of the drug, and the vets with the most experience and see what happened.  Suzy was obviously the most involved with this as she was doing the majority of the nursing while Toni and Tess’s job was catching and prep’g.  Our first animals did, in fact, take a long time to wake up, still being asleep 3 hours after the operation. The doses of Zoletil were decreased, and we used the combination chart replacing the Ketamine, with a markedly lower dose of Zoletil, however, combining it with the weight-specific domitor and butorphanol. After 527 anaesthetics, we unfortunately had a cat castrate that died. A 12wk old puppy which we were spaying, worried us as she went into apnoea, we then tubed her, gave her some antisedan and she woke up without consequences. However the dogs wake up calmer, with fewer animals fitting post operation.  So we all agreed that we would use the drug again in preference to Ketamine in future trips (despite the increased cost).

Having had lizzy and Amy as vet students last year in Mozambique, I ended up being a bit blase with Anna and Phoebe. I paid them less attention and expected them to be able to get on with it and do it.  Again it all went well, with the typical problems of inexperience and knowledge of what is a tight ligature and how much tissue can you tear.  The other difficulty surgery wise is that the dogs were covered in ticks, therefore surely carrying ehrlichia, babesia etc…causing them to bleed a lot.

One of our most memorable stories was this stray bitch that had been found at the beach.  She was laid in front of Anna to spay, so Anna got her equipment organised, put on her drape, with drape clamps and did her first skin incision. Suddenly with no warning, the bitch leapt off the table, landing the large stone which had been holding her in place onto Anna’s foot, whilst running out of the room, literally entirely conscious!! We all screamed, and she then got recaught by Suzy before leaving the grounds, and re anaesthetised.  Anna then restarted operating and naturally, it became a nightmare, she was bleeding too much.  Anna was unsure of her ligatures, I got called in.  Yes, she was bleeding a lot, so Anna finished the operation, we put her on a drip, reversed the domitor and woke her up as quickly as possible.  She seemed fine, she woke up, we all breathed in relief and got back to our following surgeries.  Then she started bleeding from her wound, staggering around dripping rapidly.  We didn’t have any bandages; they didn’t have any bandages either, so we tied swabs together got a huge piece of cotton wool and strapped it around the dog.  When we finished our working day, it was decided that we would leave this dog in the pound and either she would be ok or not the following morning.  She was fine the following morning, and this picture tells the story. 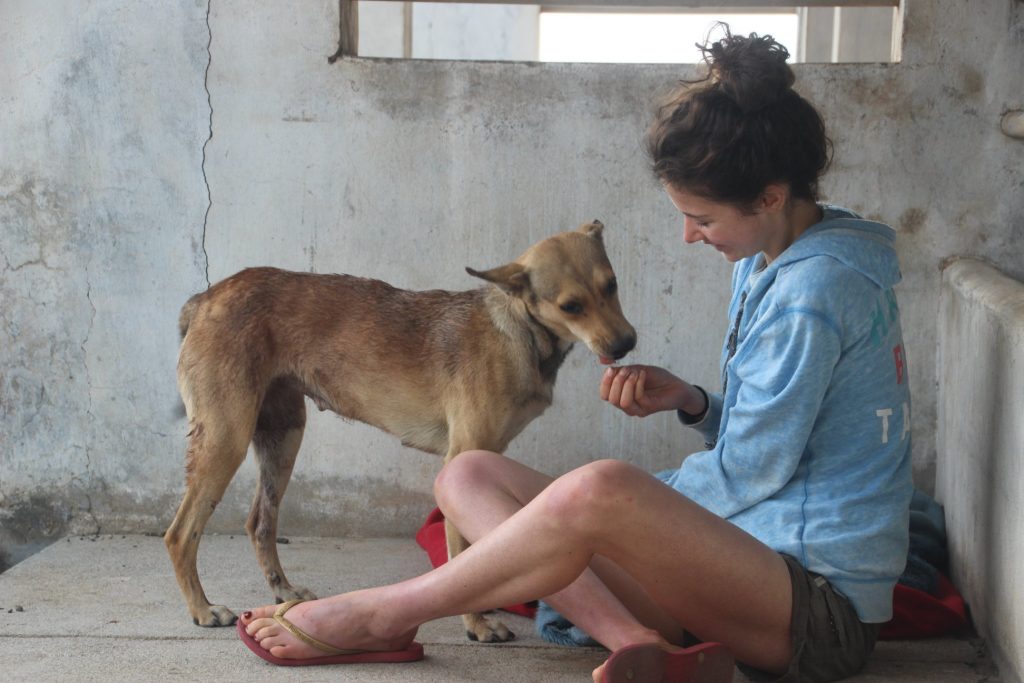 After the 4.5 days, we had already done 178 animals and were amazed at the number of dogs, with people bringing their own dogs.  Ownership of dogs isn’t the same as in Europe, but the locals definitely liked their dogs, they bought them to be operated on and then waited for them to wake up to take them home again. Toni and Tess then intermittently disappeared with Roni and Mario to catch and bring back more dogs in the pickup. We were also surprised at the number of female dogs, and there weren’t many cats.

The second week we were more in the swing of things, the music was blaring all the teething problems were out of the way, and even Lizzy had calmed down!!  We were only working for four days with us going to Center of rural development of Ribeira das Patas on Wednesday to work in what seemed the Mairie of a pretty small village.  Before arriving, we had written to Irlando to tell him we estimated being able to sterilise 350 animals in our time there and we wanted to achieve the numbers especially as the accommodation and food were excellent, and everybody was so friendly to us.  At the end of our working day on Tuesday we had already reached 375 animals, and thankfully our drugs hadn’t run out.  Every animal operated on was getting an anaesthetic combination including a narcotic.  They were also getting a long-acting antibiotic jab and a nsaid, with the majority even getting a shot of ivomec.

The last day involved Jill hitting the 100 animals neutered though she had already been out the night before to celebrate!! 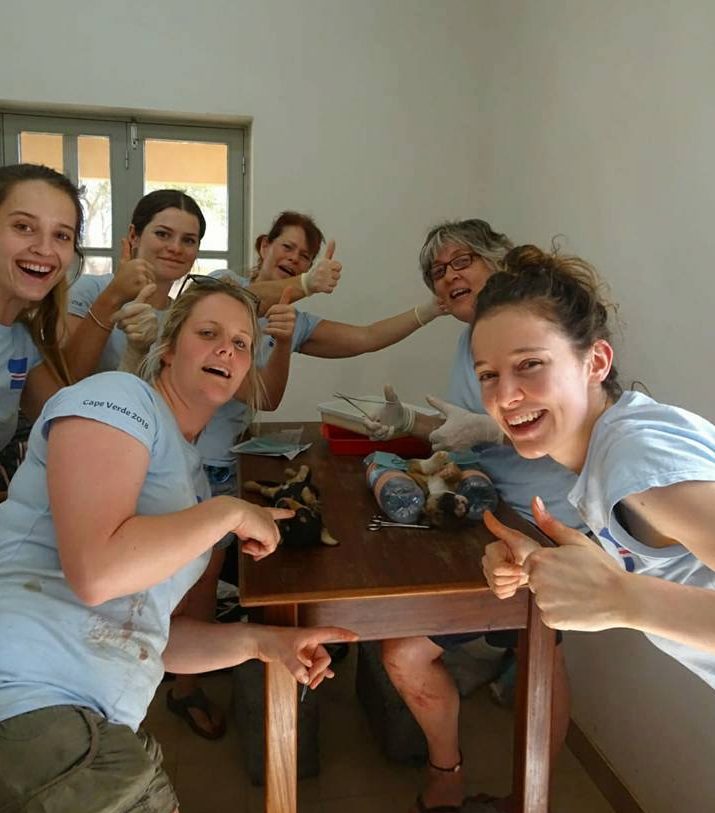 Suzy still had the energy to do the maths after a fantastic score of 92 animals operated on to tell us we had done 527 animals in all and Motta, who started the sejour as Michel agreed.  We were all very happy and very tired, but we held a little ceremony and gave out awards to the workforce of drivers, catchers, cleaners, Viviene and Irlando who had made it all happen.

So after another successful Spay Sisters trip we must also thank the people who didn’t come but contributed.  We were lucky enough this year thanks to Toni Cobbett to get a very generous donation from Mr Peter Cullimore, whom we will be sincerely in love with if he wishes to continue to sponsor us next year!  Also David Eagar, who allows us to buy our equipment, draps and syringes etc.. through his surgery Elmhouse Vets, Chelmsford.  Koen Goovaerts and Monica for allowing me to purchase the drugs through the Cabinet Veterinaire de St Pons.  The University of Bristol for providing us with a lot of sterile gloves brought along in Phoebe and Anna’s suitcase. And lastly all the employers that allowed their employees to come away on the adventure. 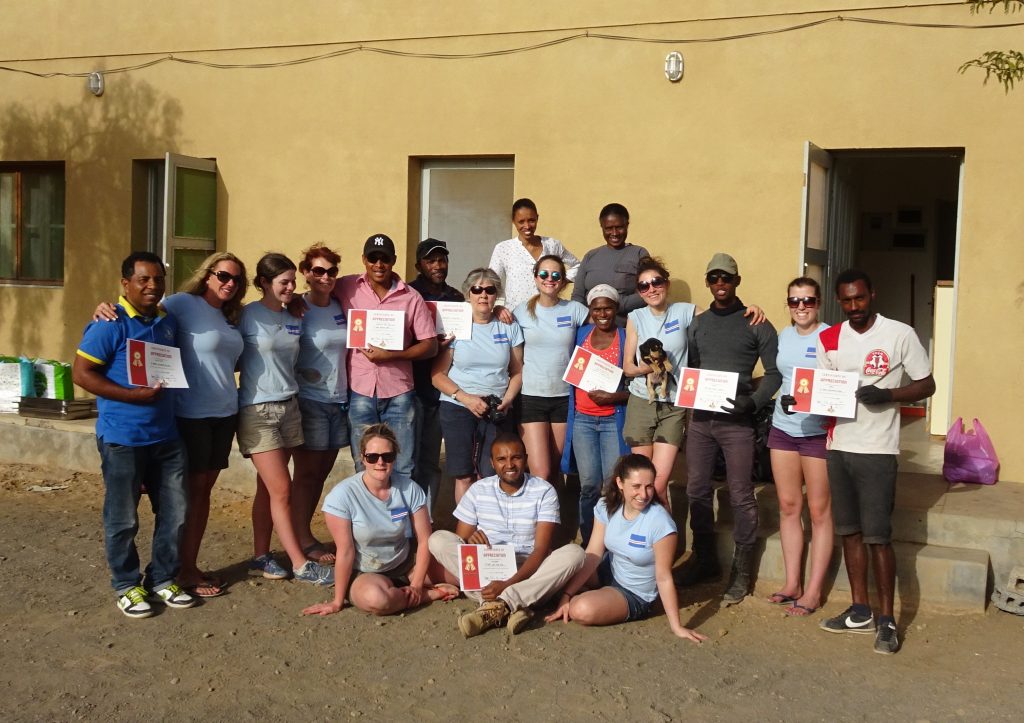